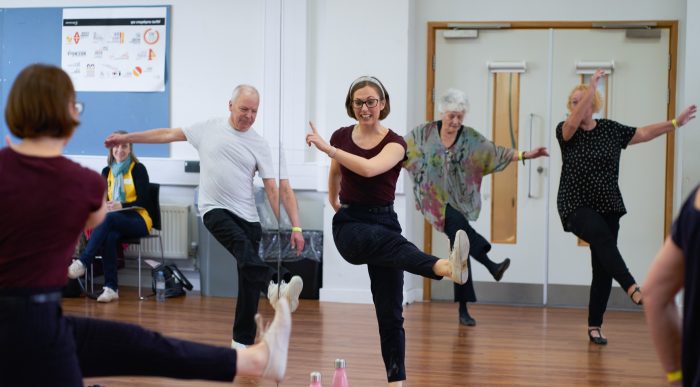 Following the success of Dance Re:Ignite in 2017, BEEE Creative brought back a second series of its collaborative dance project, in order to develop dance practice and infrastructure for those aged 55+ in Hertfordshire. With its 16-month programme culminating in April 2020, we take a look at the highlights of Dance Re:Ignite 2.0.

There were eight strands of work that interlinked to support the project, these included:

Moving Memory Dance Theatre (MMDT) was commissioned for the first year, working with 12 participants & Casson and Friends: Tim Casson and Tom Butterworth worked with 8 participants in the second year to co-create dance performances that toured to sheltered housing, cultural venues and festivals in Hertfordshire.

Both commissioned pieces co-created performances and linked workshops that were delivered as part of the tour. 21 volunteer performers received training to co-deliver the associated workshops.

Dance Re:Ignite Festivals 2019 and 2020 both featured a full day programme across multiple spaces, including dance workshops, performances, and time to socialise. In total 350 participants were involved in the festivals and over 500 audience members came to watch

A film was created to document the festivals and choreographic processes of the commissioned work. The film is available to watch at http://beee-creative.co.uk/wp/dance-reignite/

Workshops for local practitioners were delivered to 61 participants by 37 specialist artists, covering a range of skills and practicalities for working with older people.

We’re continuing to develop an ‘early career’ community arts practitioner as part of the internship opportunity through the Dance Re:Ignite 2.0 project.

Carrie Washington, Director of BEEE Creative explains: “As well as seeing a great number of participants involved in the project, we were thrilled by their many positive comments and unexpected outcomes that were met as a result of Dance Re:Ignite 2.0.”

Comments from participants who took part in Dance Re:Ignite 2.0 included:

Now I am doing quite a bit of creative dance – I am wanting to improve in that way – becoming someone who can look after their body better.

What has meant a lot to me is that we help each other out and we look out for each other when we’re struggling.

I felt jubilation – I haven’t performed for a long long time. It was quite an achievement to take part. To work on something and to perform it, the ending of the actual piece. It felt good. We all felt that. We were all on a high afterwards.