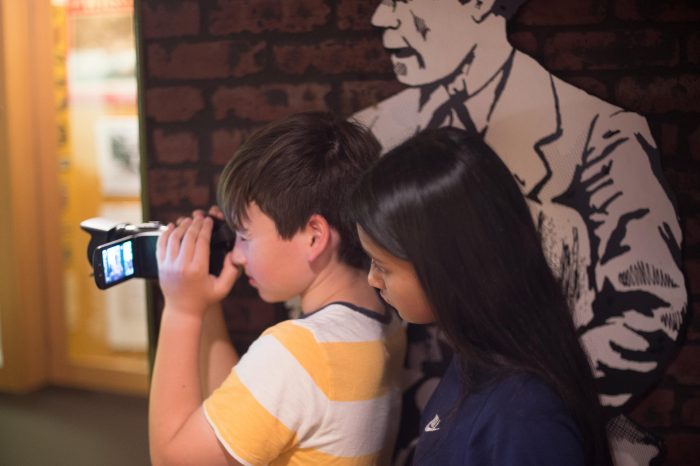 Museums in Motion is back with Performed Transformed, tackling the issue of how communicate with each other in the 21st century.

As our week of research and development for Performed Transformed drew to a close, we asked Joan Crowley, a Middlesex University dance graduate who joined us at Watford museum as part of her internship, to reflect on her experience with the project.

“I was invited to join BEEE Creative and makeAMPLIFY during the first part of their Museums in Motion project in Watford. Having never worked on a community project, let alone one involving young people, I had no idea what to expect, and I found the experience both challenging and eye-opening.

Over the course of the residency, we held various discussions with the young creatives about how social media and our phones have altered the dynamics between humans in the 21st Century. I was intrigued by what they thought of these aspects of our daily lives. Indeed, as I had expected, they all had different social media accounts and used them every day. However, I was surprised to discover that they used them in different ways – often depending on how old they were. One of our participants explained to us the importance, to people of her age group, of the amount of followers she and her peers had. We talked about this idea at length, expanding on possible reasons why this was so important to her and devised some very interesting movement material from the discussion. We built on the aspect of having ‘followers’, and how sometimes we are not aware of who is looking at what we put online. The participants spoke at length about how they recognise that people have a less interpersonal experience of life, due in large part to how much we rely on our phones. A beautiful example of this was pointed out by one boy who said that he could spend hours in his room ‘talking’ to people, without having to say a word.

What struck me the most about these moments were how the children physicalised the very complicated ideas and emotions we were talking about. All of them started from the same point, but the movement they created all had completely differing qualities, and portrayed different parts of the conversations. I have to admit that I was surprised by the maturity of thought displayed by these young people, and I’m very much looking forward to seeing the finished product in October.”